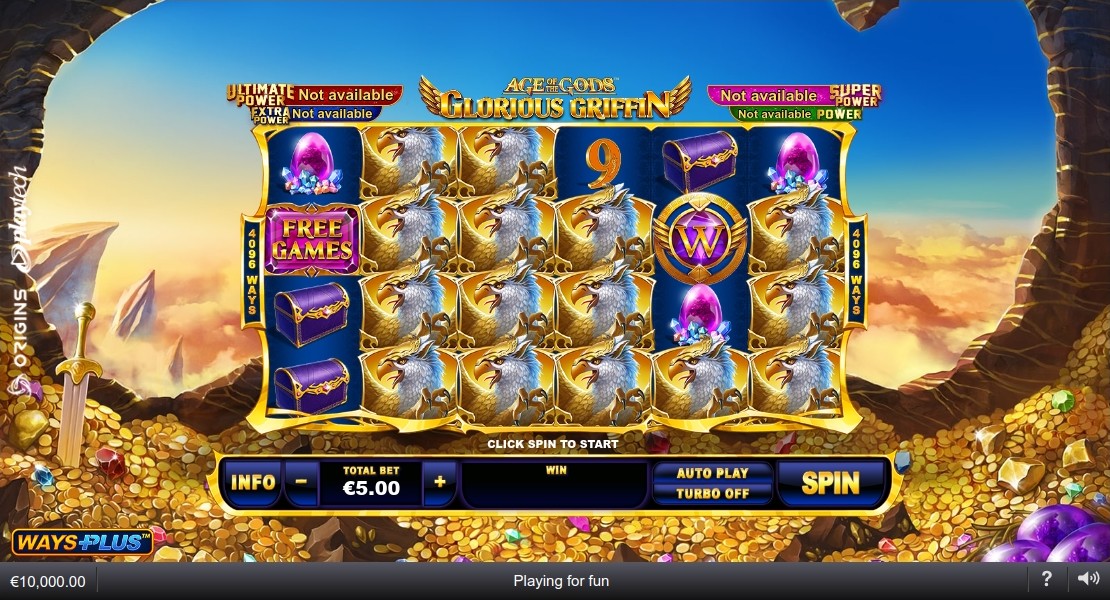 The release of the original video slot Age of the Gods: Glorious Griffin by Playtech became a pleasant surprise for the fans of this famous developer. This gambling game contains a fascinating plot and all kinds of options. Here users will discover as many as 4096 paylines! Therefore, the bankroll in the Age Of The Gods: Glorious Griffin slot can be up to 40,960 times per bid.

A gambling novelty by Playtech entered the global gambling market in June 2020. The gameplay in Age Of The Gods Glorious Griffin slot takes place on 6 reels, where symbols can be located in 4 autonomous rows. The RTP coefficient here is 96.08%. The variance of this video game is rated by online casino experts as medium-high. The chances of winning the Age Of The Gods Glorious Griffin slot are quite high, but there is also the possibility of a string of defeats for the user. The game features a demo mode for novice gamers. For more experienced and daring customers, the game has a paid game format.

Age of the Gods Glorious Griffin video game is another gambling product created in the theme of Greek mythology. Modern casino players prefer games with similar stories, therefore developers very often use just such stories to create video slots.
The main character of the game - Griffon corresponds to the image that can be found in mythological texts about the Greek gods. During the round, you will discover new secrets and look for clues to find the cherished treasures of the ancient gods.
Excellent gambling design complemented by generous options and lucrative bonus incentives. Due to a large number of winning combinations, the gameplay is original and novel, where each next round is different from the previous one.

The soundtrack and original graphics of the Age of the Gods Glorious Griffin video game will give you a sense of stunning ancient Greek grandeur. All events and characters on the screen will appear before you in a very colorful and expressive way. Each hero of the game carries a unique mythological meaning that will be opened during the game. Each game symbol has its own value in the slot. Pictures land on the drums accompanied by magical blue fire.

The video game Age Of The Gods Glorious Griffin generously presents its participants with prizes and bonus incentives. The game has various symbols: Wild, Scatter, expanding symbols, and so on. So, any gamer can take part in a series of free spins, which are activated as soon as the player catches the desired symbols on the reels. Thanks to free spin rounds, your position in the game can improve significantly and you can multiply your winnings several times.
Age of the Gods Glorious Griffin slot also offers a progressive jackpot option for the most sophisticated gamers. It can appear randomly in your round if you collect valuable symbols on the paylines.

Playtech is one of the leaders in the gambling entertainment market in 2020. Age Of The Gods Glorious Griffin video slot is created in the best traditions of the brand, where high-quality graphics are combined with exciting bonus options. This slot by Playtech is of particular interest for fans of the game for real bets, because you can win good money here.