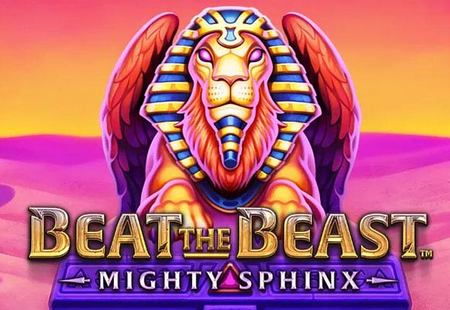 Beat the Beast Mighty Sphinx is the second slot in a series of games dedicated to monsters from ancient legends and legends from Thunderkick. The central character is the sphinx, which belongs to ancient Egyptian mythology. The game was released in the spring of 2020.

The slot has five reels, three rows and nine constantly active paylines. The range of rates is quite wide (fourteen fixed values are available).

The maximum multiplication that can be obtained in the game is x4444. The RTP indicator is fixed at around 96.14%. The volatility of the slot is high, there is no risk round.

Images of a scarab, a sphinx, statues of Egyptian deities and other pictures corresponding to the general theme are used as icons. There are two special symbols: a combined Wild and Scatter in the form of a golden emblem with the image of a sphinx, as well as an additional Wild, represented by the letter W, which appears only during the implementation of the bonus (for more details, see below). Both icons are paid independently, moreover, the emblem brings random payments.

They tried to unravel the secrets of the Sphinx for centuries, but they failed to lift the veil of secrets. Gamblers are transported to the desert, in the middle of which there is an ancient tomb. It is in it that the main events unfold, namely, the confrontation with the powerful sphinx.

The abundance of gold on the screen, detailed characters and tombs in the background of the game screen do not give any doubt that the action takes place in Ancient Egypt. The graphics and animation of the slot are of high quality. A mysterious melody with oriental motives completely immerses you in the atmosphere of exciting adventures.

The bonus options of the slot are varied and interesting. The first function is called "Mystery" and it is associated with the Sphinx Emblem symbol (combined with Wild and Scatter). At the start of each spin, up to three cells will be defined where this icon is placed.

Free spins are also provided. Their number is ten. The appearance of three symbols with the emblem extends the round by another five spins. The "Mystery" option is also valid during free spins.

If the bonus game restarts, one of the symbols of the middle group turns into an additional Wild. This gives you even more chances of making up winning combinations.

Beat the Beast Mighty Sphinx is a spectacular design, an opportunity to touch the secrets of antiquity and excellent payouts that can be received both in the main mode and during free spins. Unravel the secrets of the Sphinx right now!

Rich Wilde and the Amulet of Dead

Riddle Of The Sphinx