Not so long ago, another unique adventure-themed slot appeared in the world of online gambling. This time, the provider Pragmatic Play created a game based on events from the life of the famous traveler John Hunter, called Da Vinci's Treasure. 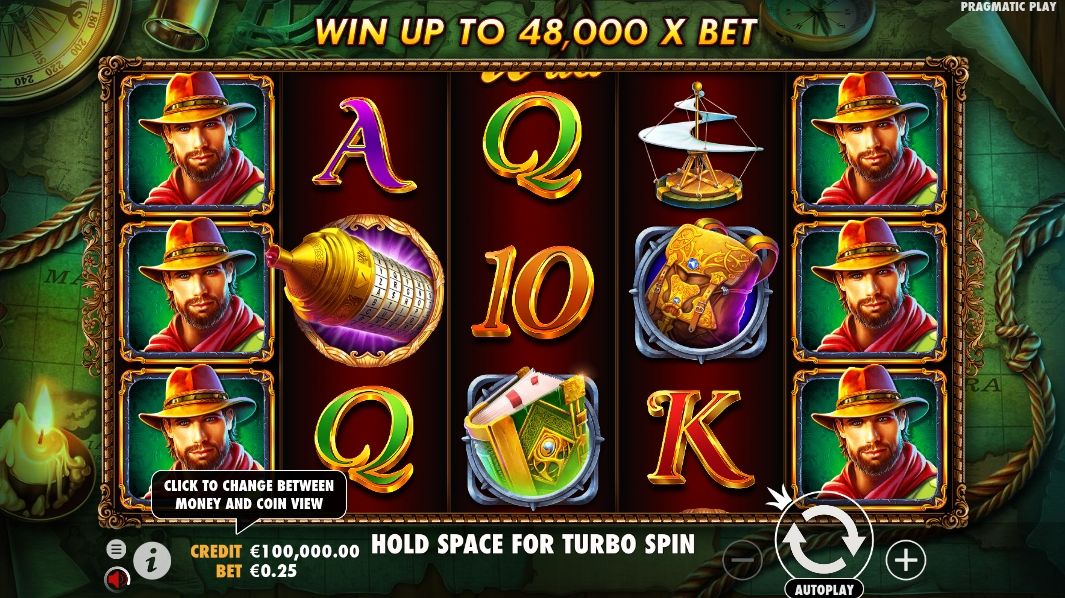 The video game has 5 reels, 3 rows, and 25 fixed paylines. Upon the first spin of the Da Vinci's Treasure reels, you will have several dynamic options that will allow you to win good prizes in the end.
The slot has a demo competition mode for novice gamers and those who do not like to take too many risks in the new game. Also, this gambling model has a special payout table for those who are ready to rush to victory by making real money bets immediately. The higher the bet in the game, the more chances you have to get a big jackpot in the end of the round.

The game in Da Vinci's Treasure slot takes place against the background of colorful and magnificent landscapes that the main character of the slot - John Hunter - meets on his way. The legendary hero has a lot to do before he finds his way to the treasure. During the game, you will come across images of a crossbow, a deck of cards, a backpack, a book, John Hunter himself, and other pictures. Each symbol and icon in the game has its own price. The most inexpensive images are card symbols. A book and a backpack are slightly more expensive. The most valuable sign in the slot is John Hunter.
Virtual slot Da Vinci's Treasure has an average RTP level of 96.53%. The volatility rating is equal to 5 points. A high variance means that you can win quite a lot with big bets.

The exterior design of Da Vinci's Treasure can be called truly colorful. The animation and graphics in this game model are beyond praise. As soon as you launch the video slot on your device for the first time, you will see a real animated game film with frequent changes of angles and an unpredictable plot. In addition to high-quality graphics, the slot machine can also attract attention due to its excellent sound.

The video game by Pragmatic Play has 3 different features that will take your round to the next level. To participate in one of them, you need to catch 3 Cryptex Scatters that can appear on the middle reels. The first feature is called the prize collector, where you get 3 different Da Vinci paintings and choose only one. If you are lucky, you will run the multiplier option as a result of your selection.
The next function is called the Map quest, during which you spin the wheel and try to get to the end of the map. Also, players can launch progressive free spins in the game Da Vinci's Treasure. This can be called the main gift for users who have chosen this slot. The number of spins is constantly increasing and your final winnings in the game can grow by 60 times from the original bet!
Da Vinci's Treasure also has a jackpot option. The maximum possible amount is x48,000 coins.

The game model Da Vinci's Treasure has stunning graphics and a fascinating story. The game will appeal to fans of the adventure genre, where treasure hunting becomes the main task of the characters. An excellent bonus program makes the gameplay in the slot very profitable for users.