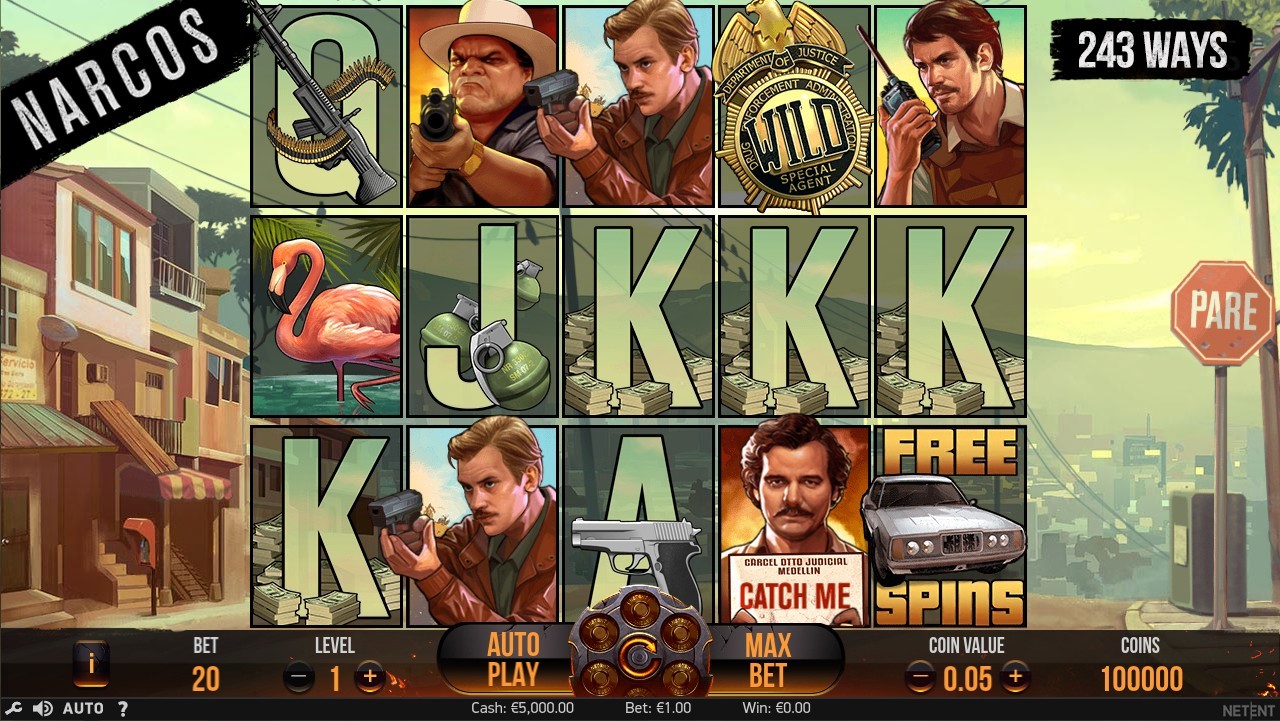 The Narcos slot is a remake of the crime drama television series about the life of Pablo Escobar. Music, design and course of the game maximally deep a player into the atmosphere of a fictional city full of drug cartels. Try to stop the mess, calls NetEnt.

NetEnt programmers, creating the Narcos slot, tried to make game events much closer to the story line of the similarly-named TV series. The fictional city, flooded with drug cartels in the film, is present in the slot as well, like a reel panorama, where bandits can suddenly appear and fire the playing field around. The drama of the series becomes the drama of the player.

The graphics of the slot remind the fascinating Grand Theft Auto game. It's just that money, grenades, playing cards, cars, flamingos, a police badge are transferred to the reel. The heroes of the series are present there as well.
Play and have fun - the motto of the creators by demonstrating background events resembling the TV series. The high quality of the main "picture" clearly overshadows the blurry contours of a city block made with unthorough animation. However, the seeming stillness of the left side of the background is sometimes disturbed by the real swaying of palm branches located to the right of the reels. Sometimes birds, planes fly by. A breeze blowing dust away goes before a series of events.
An important detail is the musical line. There is always a melody that has become a symbol of the series, periodically toning down by the sounds of key events on the reels. Sometimes, there is a background sound of a blistering wind penetrates through the melody.

The player can enjoy the following combinations:

Narcos bets will pleasantly surprise players with its extended range: the minimum is limited to € 0.2 and the maximum is € 400. Moreover, winning combinations have 243 options as well. However, it should be noted that the slot does not promise any "manna from heaven" - the return percentage is slightly more than 96%. This NetEnt slot provides a steady game at modest (or limited) bets. The maximum win based on slot's mathematics is slightly larger than "x1500" of the total bets.

The NetEnt programmers while developing Narcos broke some traditions, so the Narcos goes without common "Risk game", which present in many slots. The popular Jackpot has also been forgotten. Since the slot repeats the TV series plot and there was no such a thing.