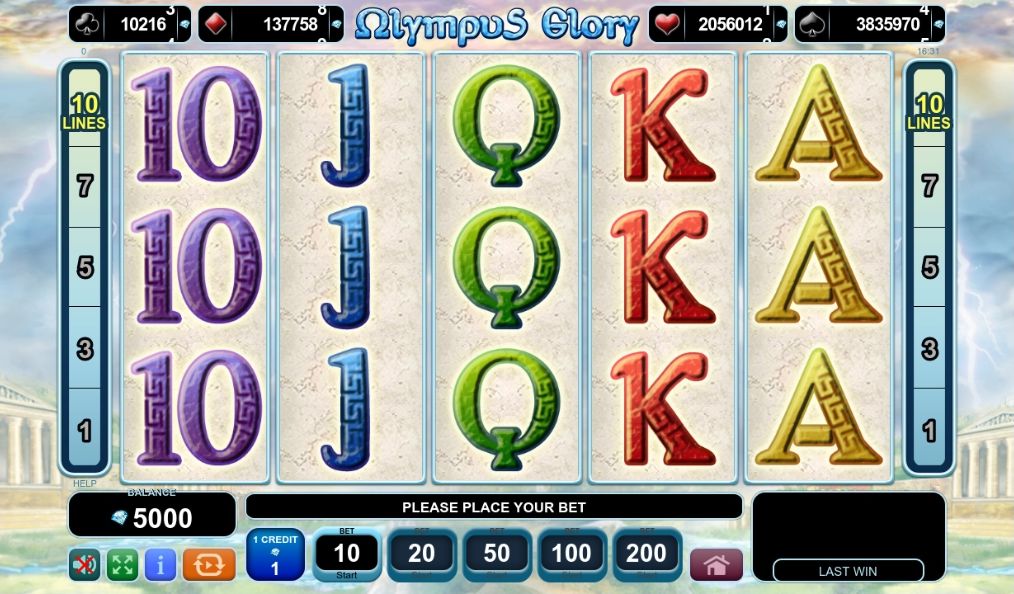 The game from the EGT brand invites users to the magical and majestic world of Ancient Greece, or rather the myths that were born on this land. This is not the first time the Bulgarian provider has given its fans high-quality gambling products, and the release of Olympus Glory has become a good continuation of a good tradition. This slot machine is available both for playing in the download mode on the gadget and in the online mode. Choose the most convenient option for yourself and start spinning surrounded by ancient Greek deities.

The slot is equipped with 5 reels and 10 paylines. This is enough for an excellent and profitable video game. The slot control panel is in an accessible place, so even if this is your first experience of gambling, you will quickly figure out what's what. By the way, a gambler can independently change the number of lines at his will. The more identical pictures he collects, the sooner he gets to the winning prize in the game.

As you can see from the name of the slot, the game events will take place around the Greek deities. This topic is no longer new for the gambling industry, but EGT has managed to add an element of originality to it, thanks to which the slot machine has earned popularity among wide range of gamers.
The main character of the game - Zeus the Thunderer, who plays a special role here. He represents both Wild and Scatter symbols at once. Also, during the gameplay, icons of cards of different denominations and suits will appear in front of you.

Launch the game on any of your computer devices and you will see colorful images of the deities of Ancient Greece. You will see Zeus, Poseidon, Athena, etc. All this will happen to the sounds of majestic music. Each image in the slot is depicted in incredible detail. The design and animation features in the video game Olympus Glory deserve the highest praise.
The slot machine interface is also available in Russian. This is a very simple set of options that are easy to find and use in the game.

The main feature of the bonus games in the Olympus Glory slot is the presence of 4 progressive jackpots at once. With these original rewards, the player can win good money by choosing a paid competition format. In order to find out the amount of one or another available jackpot, just look at the top of the slot screen. Above the reels there are 4 windows with different card suits. Here you will also find the amounts of jackpots, which are constantly changing.
Also, you can take part in a special jackpot game. 12 inverted cards appear on the monitor screen. You need to open them until 3 of them are of the same suit. The collected combination will correspond to the received winning in the final game.

The new game Olympus Glory will appeal to those users who love stories about Ancient Greece, as well as are fond of its mythology. The virtual machine by EGT offers users a good RTP level and spectacular graphics.