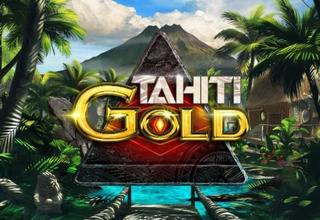 Online Casinos in coun_UNKNOWN where you can play Tahiti Gold

Slot machine Tahiti Gold from the provider Elk Studios you can play in demo mode, completely free. The game was released in 2019. The Tahiti Gold slot has the following characteristics: return percentage 96.1%, 6 rotating drums, 4096-262144 paylines, game volatility not known. There are bonus games, free spins available there is a symbol Wild, no symbol Scatter and there is a multiplier. You can play the Tahiti Gold slot machine in automatic mode, there is a mode "Fast spin". The size of the bet ranges from 0.2 to 100 $, €, £. The maximum winning in the slot is x5000 the player's bet.

Tahiti Gold slot from ELK Studios invites gamblers to travel to Polynesia. Here are hidden secrets of ancient civilizations, many non-standard bonuses and the opportunity to win up to x5000 bets on 262144 paths.

The slot machine has a non-standard structure of the reels. Initially, the layout of the playing field is 6x4 cells (4096 lines), but as combinations are formed, the number of symbols in the columns increases, and the number of ways to form chains increases to 262114. The range of bets is wide - from 0.20 to 100 coins are accepted per spin. There is no risk round.

The symbols are represented by various animals and mysterious signs. There is also Wild (sun), which complements the combinations in case of such a need, and Bonus (volcano), which is responsible for triggering free spins.

The symbols in the slot machine can appear not only in the usual, but also in an enlarged size (2x2, 3x3 or 4x4). Any image can become a mega-icon, it happens in a random way.

The game was presented to the public in the summer of 2019. The volatility of the slot is high, the expected return rate is 96.1%.

In the center of the plot is the famous explorer Kane. He survives a plane crash and finds himself on a volcanic island lost in the ocean. The hero gets to the natives, who recognize in him the king they have been looking for for a long time. Quite unexpectedly, the whole island is at Kane's disposal. Everything around is literally filled with gold, but mysterious spirits are unlikely to want to give it away just like that!

The slot is designed very realistically: the game screen is surrounded by ancient totem poles. An erupting screen is visible in the background. Modern 3D graphics and excellent soundtrack allow you to fully immerse yourself in the atmosphere of the mysterious island. Animation effects will also impress even the most picky gamblers.

The number of bonuses provided in the slot is impressive. The randomly triggered Wild Forge option can cover up to four reels with special Wilds. They are able to replace all subordinate icons with similar ones.

If two symbols with the image of eyes appear anywhere on the screen, the "Eye of Tiki" function starts, which destroys all the icons between them and starts the "Avalanche" mode. Its essence lies in the fact that when a winning combination falls out, the symbols are removed from the screen, and those that are higher are dropped in their place. As the combinations are formed, the playing field grows. "Avalanche" can become not only a continuation of the "Eye of Tiki" option, but also start on its own after any victorious spin.

Three to six images of the volcano start the free spins mode. There can be from ten to twenty five bonus spins. Wild becomes "sticky" in this round, and each winning spin makes the reels "go up". The round can be extended.

Tahiti Gold is a multifunctional slot with innovative features, stunning graphics and animations, and the ability to win big prizes on every spin.