NetEnt recently launched on the gambling market its new product, the Victorious MAX slot.
The storyline of the game revolves around the ancient Roman battles. A high percentage of return, more than 96%, promises gamblers both an entertaining game process and the opportunity to increase their material well-being.
The Victorious slot machine is available to users both in a browser and on a mobile device for downloading. Gambling beginners are advised to make first spins in the Demo mode, which is also open to users of the slot machine from NetEnt. 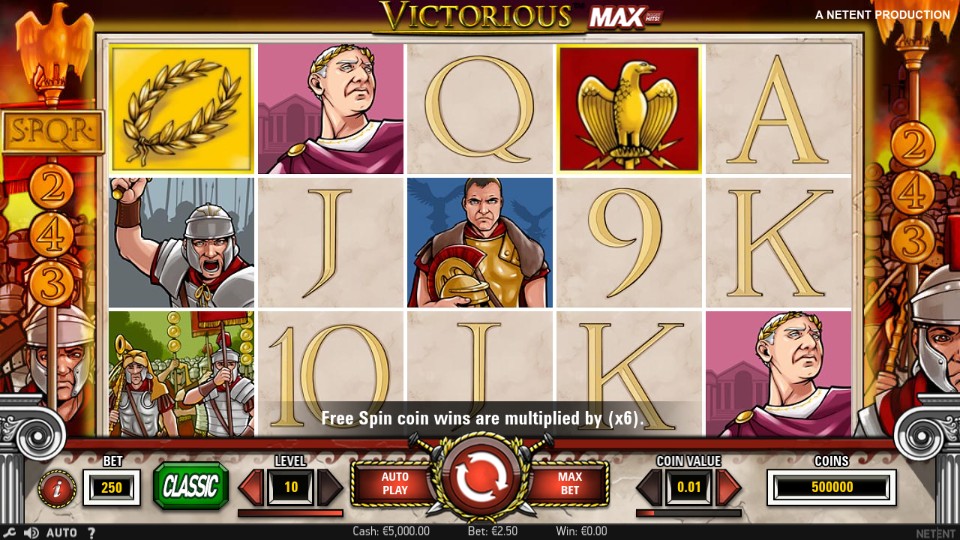 A historical story with various symbols and characters of Ancient Rome unfolds on the screen of the Victorious slot. Here, every element, every movement, and every image takes users to the time of the great and undefeatable Caesar.
As soon as you start the game, a brave military leader will appear before your eyes, seated on a magnificent throne, surrounded by his gladiators. Battles and clashes, victories and defeats, all this you will see and even take a direct part in. If you catch your luck, the gambling slot will give you more than 190,000 coins in just one spin.
Graphics, sounds, and animation
A high-quality game is impossible without a friendly interface. In the Victorious slot, everything is in the appropriate place. An ideal and understandable control panel will provide unforgettable and successful gameplay even for beginners. The main set of buttons in the slot is as follows:

If you want to get known of the amount of your winnings, pay attention to the display at the top of the device, named Win.
You will spin the reels on the monitor, which are depicted surrounded by real Roman warriors. Steel helmets, shiny armor, and the selfless look of each character will certainly inspire you with confidence in victory. You will not see scenes of bloody battles and terrible violence in the game. Military battles take place on the screen in a quite aesthetic manner, against the background of the natural landscapes of ancient Rome.

The Victorious slot will allow you to collect winning combinations of some certain symbols and you will be able to use rewards in the form of free spins. For example, the Scatter symbol in the form of a laurel wreath may fall several times in one round. If you are lucky and this happens, then you will get the opportunity to spin the reel several times for free. Keep in mind that if you have a good deal of luck during the bonus rounds, your winnings will automatically triple.

The Victorious slot machine has some standards and limits. The return coefficient here is close to 97%, but if we talk about returns in bonus games, this value here is much lower and amounts to only 30.4%.
In order to get profitable scatter symbols, gamblers will have to sweat and toil because the probability of such an outcome is less than 1%. The advantage of a gambling slot is that users may receive an unexpected prize after each spin.

NetEnt offers its users unique new gambling products, including the Victorious gambling slot. Its graphics, an exciting historical storyline, and a high coefficient of return attract the attention of gamblers in many countries of the world.