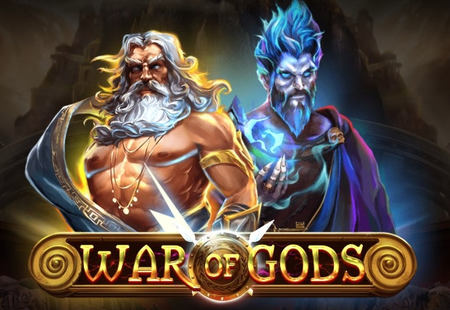 Online Casinos in coun_UNKNOWN where you can play War of Gods

Slot machine War of Gods from the provider Red Tiger you can play in demo mode, completely free. The game was released in 2021. The War of Gods slot has the following characteristics: return percentage 95.66%, 5 rotating drums, 45-60 paylines, game volatility high. There are bonus games, free spins available there is a symbol Wild, there is a symbol Scatter and there is a multiplier. You can play the War of Gods slot machine in automatic mode, there is a mode "Fast spin". The size of the bet ranges from 0.2 to 20 $, €, £. The maximum winning in the slot is x2518 the player's bet.

The War of Gods slot machine is a novelty from the Red Tiger company. The slot is dedicated to the eternal confrontation between the most powerful ancient Greek gods - Zeus and Hades. Instead of the usual free spins and special symbols, the machine provides many innovative bonus options that make it truly unusual and profitable.

The War of Gods slot has five reels and sixty constantly active paylines. The number of rows in normal mode is four, but during the implementation of bonus functions, this number grows.

You can bet from ten cents to twenty euros on a spin. The volatility of the slot is high, the RTP is stated at 95.66%.

All symbols of the machine correspond to the general "combat" theme - on the screen you can see a helmet, shield, horn, etc. Low-paying icons are represented by card denominations. The average group of symbols is combat accessories. All of them are paid when a combination of 3, 4 or 5 icons falls out.

Payments for images of gods are calculated differently. More on this below. This group of symbols is valued most highly (the maximum coefficient is x3000).

The plot of the machine is based on the confrontation between two brothers and irreconcilable enemies - Zeus and Hades. One manages the underworld of the dead, the other lives on Olympus. Gamblers will have to become spectators of a truly fierce battle taking place right on the game screen.

The graphics and animation of the slot are developed using the most advanced 3D technologies. Periodically appearing on the screen, the main characters in full uniforms look really impressive, while lightning flashing in the background and falling lava flows add even more tension to the atmosphere. The musical accompaniment corresponds to the theme, but it is unobtrusive and does not distract from the gameplay.

The first bonus option is related to Zeus. It starts when symbols with a 1x2 image of a god appear on the first and last reels. If this happens, the icons "grow", filling the corresponding reels completely. After that, respins are launched, during which low-paying icons are removed from the field. A completely identical bonus function is valid for the symbol with the image of Hades.

Another interesting feature in God-activated modes is the shield. Its appearance guarantees the improvement to the symbol of Zeus, due to which the color of the icon changes, as well as its coefficients grow.

If a shield falls out in a round with Hades, then rows and reels grow (up to a maximum of 7x7), which means that the number of chances for forming combinations also increases.

If both gods land on reels 1 and 5, then respins are also triggered, but with the combination of the above upgrades (reel growth + symbol improvement).

The War of Gods slot machine from Red Tiger is a novelty that will definitely appeal to those who are tired of the usual slots and want to try something truly unusual.

Similar games to War of Gods

Age of the Gods: Norse Gods and Giants

War of Gods Reviews By Players